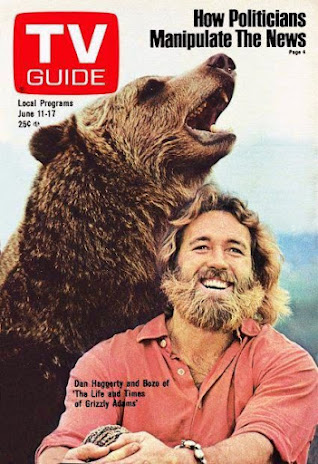 With the possible exception of Raymond Burr, the only TV star who ever gained more than 100 pounds in a successful network series is Ben, the bear in NBC's The Life and Times of Grizzly Adams. In only 13 weeks of production, Ben, who is really a female grizzly named Bozo, ballooned up from 501 to 607 pounds because of the steady offerings of marshmallows, hot dogs and jelly sandwiches with which her trainer, Terry Rowland, rewards her after each of her acting performances.

"Also," mused trainer Rowland, "she has a tendency to put on weight when she's in love." Rowland seemed somewhat jealous. It has been no secret at the Payson, Ariz., locations where Grizzly Adams is filmed that Bozo is in love with her co-star Dan Haggerty.

And the affection shows on the screen-which may be the principal reason why the midseason entry has been one of NBC's rare pleasant surprises this year, often beating Good Times and usually running fairly close to another hit, The Bionic Woman, in its time slot. Who can forget the memorable scene in which Bozo awakened Haggerty by pulling the blanket from his bed, then chased him coquettishly through a meadow, then allowed Haggerty to chase her-equally coquettishly-and finally rolled over on her back in the grass to allow Haggerty to scratch her belly. None of this was in the script. It just happened.

There are two factors that make such sequences utterly remarkable. For one thing, every university zoologist consulted told me that the grizzly bear is the most ferocious and untamable of animals, "totally incompatible with man." Even Bozo's four bear doubles can be utilized only when their movements are restrained by charged electric wires, lest they be tempted to eat an unwary carpenter or cameraman.

The second factor in the Bozo-Haggerty relationship is that NBC and the producers of the show. Sunn Classic Productions, wisely decided to allow the part of Grizzly Adams to be played by an animal trainer rather than an actor. Haggerty, now 35, has been working with wild beasts since he was 18. With his 6-foot-1-inch weightlifter's build and all those flashing white teeth set amid that dazzling. blond-streaked beard, he looks as if he's been taking Charlton Heston lessons for years. He hasn't.

Up until just a couple of years ago, Haggerty was perfectly content dealing solely with animals. He comes from a family of Hollywood movie technicians (his father, Don Haggerty, is business representative of Local 683, the film technician's union) and he never aspired to rise above the invisible caste line that delineates the Hollywood blue-collar worker from the white-collar actor and other so-called "creative people.'

Unhappy with toiling in the confines of a film-processing darkroom, young Haggerty acquired his first wild animal, a lion cub named Simba, in 1960. Simba was then two weeks old and still on the bottle. Haggerty was 18, just a year out of high school and married to Diane Rooker, the Queen of a rival high school in Burbank. They had a daughter and another on the way. They also had a half-dog, half-fox named Lady, a decrepit cabin in the wild mountains north of Malibu- and no money.

The purchase of Simba (for whom they hocked their living-room couch) seemed crazy at the time. Haggerty had been raised in military schools because his One parents were separated; and not being allowed to possess a dog or a cat when he was a child, he had become a lion buff at zoos and circuses. He bought Simba at an animal park called Jungle Land in Thousand Oaks, Cal., with only vague ideas of how to make a living out of the beast. Simba, accordingly, became a rather large pet.

But while buying food for the pet at Jungle Land, Haggerty made the acquaintance of Stewart Raffill, an English animal trainer who was tarrying in California with an elephant, lion, bear, leopard and six chimpanzees after doing a TV series with them in Mexico. Impressed with the natural affection between Haggerty and Simba, Raffill invited the young man to join forces with him.

He moved all his animals to Haggerty's mountain retreat, gave his new partner advanced instruction in training techniques, and soon thereafter they were hired by Walt Disney to work their menagerie in the films "Lt. Robin Crusoe, USN," with Dick Van Dyke, and "Monkeys, Go Home!" starring Yvette Mimieux. (Raffill later had a long personal relationship with Yvette and gave her a pet jaguar that ate her dog and had to be donated to a zoo.)

The Raffill-Haggerty combine did well throughout the 1960s, working their animals in such films as William Holden's "The Christmas Tree" (featuring nine wolves raised from cubhood by Haggerty) and in the Ron Ely Tarzan TV series (made in Brazil with the entire menagerie). Haggerty was in Europe with the wolves when Raffill sold a script about Siberian tigers to Pat Frawley, the Schick razor millionaire who also owns Sunn Classic Pictures. The film, "When the North Wind Blows," began production near Calgary, Can ada, and Haggerty was called home to handle the tigers, Raffill was the director. Haggerty's wife, Diane, was the script supervisor.

One day Frawley was grumpily watching the daily film footage from the Canadian location and wondering why he had strayed from Sunn Classic's tried-and-true formula movies (like "Chariots of the Gods" and "In Search of Noah's Ark"). Suddenly, as he peered up at the screen, he leaned forward and said, "Who's that Mongolian?" The script supervisor, Diane, said, "That Mongolian is my husband, who is Irish. He's doing bit parts in the picture because the tigers won't listen to anyone else."

Frawley said, "Tell Raffill to make the Mongolian the star." Diane said, "We can't. We already have a star, and the picture is nearly finished." "Then make the Mongolian's part bigger," said Frawley. "He's got great screen presence.

When Frawley realized the young man really wasn't a Mongolian, he hired him for $5000-to star in another movie, "The Life and Times of Grizzly Adams," based loosely on the historical character James Capen Adams, who committed a crime in 1853 and then fled into the Rocky Mountains, where he became a friend to all animals.

The real Adams wasn't that altruistic, selling his friends-of-the-forest to carnivals and circuses, but Haggerty played him with the tender loving care that had become his hallmark as an animal trainer. His acting was of pre-high-school caliber, but it didn't matter as he cavorted charmingly and naturally with raccoons, owls, rabbits, skunks, foxes, bobcats, porcupines, mountain lions-and especially with Bozo, the grizzly bear with whom it was a case of love at first sight.

Bozo is owned by Lloyd Beebe, a famous animal impresario in the state of Washington, but no one knows her origins. Now 10 years old, she was found by Beebe working in a circus, but she obviously had been raised from infancy as someone's pet. Puzzled scientists have studied her to try to determine how the natural ferocity of her breed has somehow been exorcized from her genes. No previous grizzly has ever been docile enough to work without restraint in films or elsewhere. Gentle Ben (of the old TV series of that name) was a much more domesticable black bear.

In any event, the chemistry between Haggerty and Bozo was such that Frawley's little $140,000 film earned over $65,000,000 at the box office. It was bought by NBC as a feature movie for television, and when it aired on the network last year, its ratings were high enough to make the NBC brass very excited. In the network's desperate struggle to catch up with ABC in the Nielsens, a Grizzly Adams regular weekly series then became inevitable. Sunn Classic rushed back into production and Haggerty and Bozo became TV stars.

The series was kicked off with a second theatrical movie, "The Adventures of Frontier Fremont," which Haggerty, in the meantime, had made for Sunn Classic. The genre being what it is, Frontier Fremont was indistinguishable from Grizzly Adams and NBC didn't worry about it.

Today, Haggerty still has difficulty comprehending what has happened to him. I met him for lunch recently at the super posh Bel-Air Hotel and he unhinged the staid doorman by arriving in a pickup truck and wearing the hand-sewn leather clothing he makes for himself-both for on-screen and off-screen use. At lunch, he marveled at his sudden popularity as a talk show guest with Dinah, Johnny, Merv and the rest; but it was obvious that the animal work in his own show still interests him far more than the acting.

He talked excitedly about how eight trainers are needed in the series, each a specialist in handling birds, small animals, large animals and such.

"With a small animal like a bobcat," he explained, "you can teach him a certain trick like knocking over a pot, and he learns that when he does it on cue--the sound of a buzzer-he gets rewarded with food. In the show, when you see a cute bunny hopping toward you or a cute skunk sitting up and staring directly into the camera, a trainer is right behind him, buzzing his buzzer. That's how we got that great scene where a grizzly bear-not Bozo-stands up with his front paws on the edge of the roof of my cabin, and a raccoon drops a pinecone on his head. We made the bear reach up for some hidden meat on the roof, and the raccoon dropped the pinecone when his trainer pressed the buzzer."

But mostly, during that lunch, Haggerty talked about Bozo, his one-of-a-kind grizzly-bear co-star. "We couldn't do the show without her," he said. Bozo, lunching somewhere with other bears, would probably be saying the same thing about Haggerty. (END)