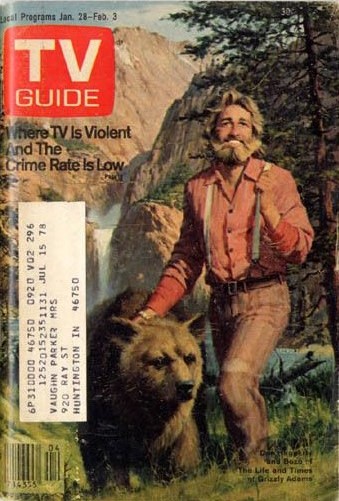 The computer labored and brought forth a bear. TV GUIDE January 28, 1978

Among television producers, admittedly a diverse lot, Charles E. Sellier Jr. holds the distinction of being (1) a Mormon, which means that he is deeply family-oriented and neither smokes nor drinks and will countenance neither vice in his shows, (2) a highly trained computer programmer and (3) a proponent of the most intricate and costly audience pre-testing concepts known to the industry. Phrases such as "test bias" and "data bank" flow easily from this intense, articulate young man who is, at 34, a millionaire, a producer of more than 26 money-making movies (all G-rated and nonviolent) and NBC's highly rated animal series, The Life and Times of Grizzly Adams.

"I believe God wants me to do the kinds of films I do." Sellier says, “otherwise He wouldn't have made me a success." In more secular terms, Sellier puts his faith in computer technology and a testing system that he devised in 1971 and which, he says, has been "finely tuned" over the years.

"We're in the Stone Age of testing. We're making the first wheel,” Sellier says. "Someday all films will be made as we do, pretesting every step of the way. But if what we did was simple, everybody would be doing it. It’s not only complex, it requires millions of dollars. Two years ago, 20th Century Fox spent around $250,000 for testing, I spent $1 million. It’s a matter of priorities.”

Sellier is president of Sunn Classic Pictures. A native of Pascagoula, Miss., he was born a Cajun Catholic - he converted in his teens to Mormonism - and earned a reputation as a whiz kid in photography and chemistry. At 20, he poured himself into the study of computers, and, a few years later in Denver, he formed his own company, producing commercials and then feature-length films. In 1974, he joined Sunn Classic, where he installed his own computer systems.

Sitting in his bleakly antiseptic office at the Sunn Classic building in Los Angeles - his home and production facility are in Park City, Utah, a ski resort 30 miles from Salt Lake City - Chuck Sellier talked about his systems tentatively, like a man slowly pulling back the leaves of an artichoke. Some aspects of the Sellier method - the heart of the artichoke - he declines to reveal. For example: “One of the hardest elements to test is whether an audience will respond to a scene designed to be heartwarming. We can do it, but it’s our secret and I intend it to remain so.”

This vital secret is also guarded, apparently, by the computer that spins out these heartwarming scenes. It's an obvious advantage for a producer of an animal series to have a computer with sentimental leanings.

Grizzly Adams was spawned out of a Sellier movie, The Life and Times of Grizzly Adams, with bearded Dan Haggerty, a one-time animal trainer, portraying the mountain man of the 1850s who befriends a lovable grizzly bear-in a Sellier production, even grizzly bears are lovable. "Going into the TV spinoff, we already had a data bank from pre-testing the movie," Sellier points out. "The movie was a hit. The series couldn't miss."

After every test, the results are fed into the computer, which then disgorges printouts that run to several thousand pages. The printouts are compressed into what Sellier terms "thumbnail reports" and distributed to the director, story editor and writers for a guidance that is absolute. "We select only high-test stories, and we eliminate any negatives our audience consistently dislikes," Sellier notes.

Sellier says: "We test by carefully worded questionnaire, by open-end interview, by telephone, by video tape, by audio tape and by other ways that I'd rather not disclose. And we start with a basic fact-Grizzly Adams is a 'bimodal’ show That means its appeal is primarily to the young and the old and those are the people we test. For us, any testing of the age group in the middle wouldn't be the 'real world.’

Usually, Sellier dispatches his researchers to shopping centers across the country "We use the 'Identity mask.’ They might say they're from the Acme Research Company, never Sunn Classic or Grizzly Adams. This is to avoid test bias, people telling us what they think we want to hear. We might take the people we're testing to a nearby rented office and show them one short film about a new bicycle, another about a new soap and then a scene from Grizzly Adams. This technique is known as the 'dummy wrap.’

They don't know what's being tested and they respond more honestly. We show them actors' faces to test potential guest stars. We show them scenes from our show mixed in with scenes from other shows. We get reactions on keywords, phrases, ideas, moods, plot sequences, clothes, types of dwellings. And we prefer to test on a 21-inch screen, rather than the large screen, which is not the 'real world' for the average viewer.”

Sellier conceived of a curious but highly workable idea for testing a television storyline-he reverts to old- time radio. Actors, none with familiar voices, are hired to perform a Grizzly Adams script into a tape cassette with character names altered as though it were a radio drama. The cassette is then played for the test subjects, who are later questioned in detail. Only one actor's voice is constant in all the audio tapes and TV segments tested-it belongs to Brad Cranford, an old radio announcer who is also the spokesman for Sunn Classic in its commercials. Brad’s voice was pretested first, of course, before we used it for testing," Sellier says with a hint of a smile.

After every test, the results are fed into the computer, which then disgorges printouts that run to several thousand pages. The printouts are compressed into what Sellier terms "thumbnail reports" and distributed to the director, story editor and writers for a guidance that is absolute. "We select only high-test stories and we eliminate any negatives our audience consistently dislikes," Sellier notes.

The cost goes up to $200,000 to test every element in a production, and from this research Sellier has acquired a bedrock of conclusions, beginning with the bear. "We tested a variety of bears, but our audiences preferred the awesome grizzly, with the big claws and the silver-tipped look. They had no fear of the grizzly because Grizzly Adams had no fear. Sellier learned that his audience delights in otters, chipmunks, beavers, skunks, but horses, surprisingly, test poorly. Instead of a horse, a burro is employed in the series. "Our audience," Sellier says, “dislikes animals being violent to humans and to other animals, and humans being violent to animals and other humans. They dislike hunting, either for sport or food - Grizzly can fish but he doesn't hunt, and he doesn't eat meat. He's portrayed as one of the first vegetarians. He wears only homespun clothes, never any animal skins. It’s not whim, it's all tested."

But there may be a measure of whim in those being tested. Sellier admits:  "We keep trying to narrow the gap between what people say and what they really mean. No testing is foolproof - not yet." Grizzly Adams share-of-audience ratings score in the high 20s, a figure that pleases Sellier. "As our testing grows more sophisticated, our ratings should rise, but we don't expect 50-plus Nielsens because we're not shooting for the total audience, just the lower- and upper-age groups."

Sellier concedes ruefully that his search was not as probing several years ago, when he produced a film called The Adventures of Frontier Fremont, which also starred Dan Haggerty. "At the end, we see Fremont from the back staring at a burned forest. He turns around and it's obvious that this man who has loved anima all through the picture is now wearing a bearskin coat. Audiences spotted it at once and they hated it."

Last year, an NBC directive instructed Sellier to put women into an episode. He contends the order was prompted by women executives at the network. "NBC has creative control of all scripts, so I went ahead against my own judgment and shot an episode we called ‘Woman in the Wilderness.’ Then we put it through testing and got a sharply negative reaction-our audience didn't want any women in the wilderness. I proved my point, but it was expensive. We scrapped half of the show, reshot the scenes involving the women and changed the emphasis to an Indian and a 12-year-old boy.”

Visual aspects also fall under intense scrutiny. "Our audience," Sellier says, “likes waterfalls, pretty vistas and high mountain ridges, preferably with actors and animals as a part of the scene. They dislike snow, except at Christmas. What they like is eternal summer in the primeval, womanless wilderness.”

One objection to Seller's methods is voiced by his outspoken star, Dan Haggerty. "People change, the testing doesn't always hold up," Haggerty reasons. "I'd like more growth, more pizazz. Isn't it logical that Adams would fall in love with something other than that damned bear? What would be more logical for a mountain man than to have an Indian woman? But they say it wouldn't test."

Industry reaction to Sellier is mixed. Paul Klein, NBC's volatile programming chief, lauds Sellier as a "brilliant and amazing Innovator.” Grant Tinker, president of MTM Enterprises, says: “I’ll always choose visceral feeling, genuine creativity, over any computer." Norman Lear, remembering how poorly his All in the Family originally tested, says “You can learn something from this kind of testing, but I have more faith in gut instinct."

On the other hand, Orson Welles visited Sellier not long ago and, after a lengthy conversation, he said “Young man, you are light-years ahead of the rest of the industry."

Seller bestows full credit for Grizzly Adams’ success on the computer. Often, he plays chess or backgammon with the computer and invariably he loses. He is undismayed by such defeats. "With the ratings the computer brings us," Sellier says, "it seems only fair.” END