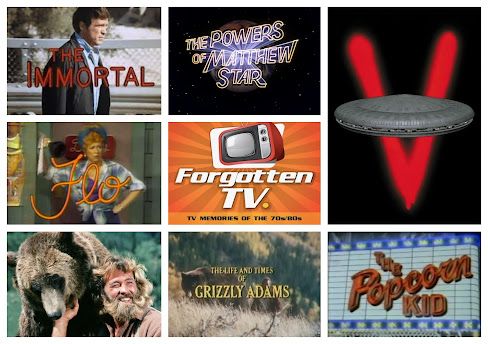 Next six episodes of Forgotten TV.
-1970: The Immortal. How a book by James Gunn was adapted into an ABC movie of the week, then a weekly series. The 'sci-fi' show that wasn't sci-fi; and how an FCC ruling that changed the face of prime time evenings for the nation led to its cancellation.
-1982: The Powers of Matthew Star. Steven E. de Souza's response to NBC's request for a 'teenage Superman' became a Friday night sci-fi popcorn series that later made TV Guide's "50 Worst TV Shows of All Time." The details on the tragedy that struck the lead actor and the network meddling that...you guessed it-'re-tooled' the show.
-1980: Flo. Another mid-season series CBS flung against the wall that briefly stuck and was a short-lived hit. The Linda Lavin/Polly Holliday drama; why Joyce Bulifant left the show; and who didn't get along? Dudes and Darlin's alike will want to tune in.
-1977: The Life and Times of Grizzly Adams. A G-rated Sunn Pictures family film that got a 43 share when aired on NBC was a no-brainer for a series. The story of Bozo the bear; how Charles Sellier Jr. was told he'd never make money with G-rated films-but 'Grizzly Adams' became one of the most profitable films of all time; and was there really...a 'Grizzly Adams?'
-1983-1985: V! A complete look at the mega TV blockbuster mini-series and regular Friday night series. To the heroism of the Resistance Fighters — past, present, future — this podcast will be respectfully dedicated. Prepare yourself for V! The Podcast!!
-1987: The Popcorn Kid. Yes, celebrate 5 years of Forgotten TV in this 50th episode with a return to the one that started it all as I cover new behind the scenes information not presented in the original podcast.
Lots of 70s/80s TV goodness ahead. Subscribe to Forgotten TV on your favorite platform.
Posted by dvdchris at 10:02 PM No comments: